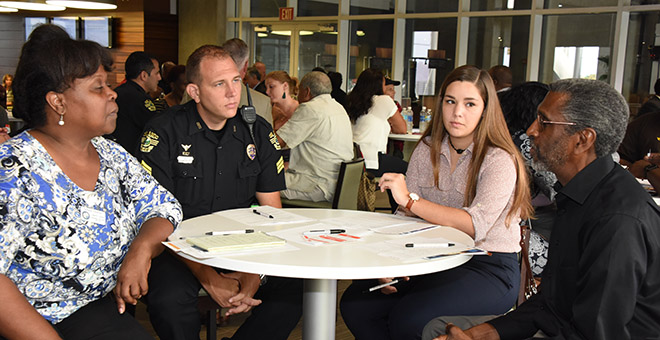 In the first of several Orlando Speaks workshops focused on strengthening relationships between the community and Orlando Police, nearly 200 people gathered at the Citrus Bowl on August 25 to have discussions in hopes of better understanding each other.

Orlando Mayor Buddy Dyer and Police Chief John Mina were joined by more than 120 community members and more than 40 officers, who sat in small groups and participated in a directed discussion facilitated by the Valencia College Peace and Justice Institute.

“It was great for police officers and residents to have a chance to have some meaningful discussion and dialogue,” Chief Mina said. “The officers that have come here are all volunteers, they weren’t told to be here.”

Mayor Dyer welcomed the crowd, saying the interactive workshop’s goal was to “strengthen relationships and trust between our officers and our residents.” He likened the relationship between the community and the police to that of a married couple, saying that people have to be willing to put in the work to maintain a positive and healthy relationship. “We have a good relationship,” he said, “but we can always make it better.”

Many residents said they were glad to have participated, and that they believed everyone listened to each other and learned from each other.

“More exchange needs to take place between the officers and the community,” said one resident, a businessman who participated in the event. “Some of the special moments came when you can hear that police want us to know they don’t know us, they want to go home, they’re doing a job….I just never put it in that context, so that was enlightening.”

Mayor Dyer has pledged to hold more Orlando Speaks events in different parts of the city. Click here for updates and more information. A second forum is scheduled for October 13 at Edgewater High School.

“We are committed to the safety of our community and working together with our residents and police to keep our neighborhoods safe,” Mayor Dyer said.