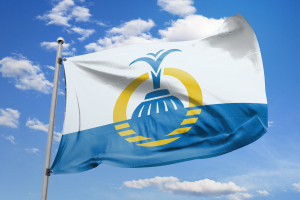 The meaning behind the flag

Orlando’s fountain at Lake Eola Park is the most distinctive and recognizable symbol in the city, one that is loved by our residents and enjoyed by our visitors. The water ascending from the fountain represents the continuous flow of energy and innovation that makes Orlando a city on the rise. The six equal segments on the base of the fountain embody the city’s six commission districts. The iconic fountain is surrounded by the letter “O”, which symbolizes Orlando’s unity, connectivity and timelessness. The color yellow represents the sunshine, hope and happiness that thrive in our great city. The reflection of the “O” in the water symbolizes our careful consideration of our past and our bold vision for the future. The flag is set on a two-toned background of blue and white representing patriotism, perseverance and peace.

Want to Order Your Own City of Orlando Flag? Follow these steps:

This work is licensed under a Creative Commons Attribution 4.0 International License.

As the City of Orlando’s story continues to evolve, so does the need for a visual identity that is both timeless and unique to Orlando. A flag, which is celebrated by the community, becomes more than just a symbol, it becomes a source of civic pride that makes people feel more connected to their city.

On February 15, 2017, the City of Orlando launched a flag redesign contest. With more than four months of public input and committee discussion, a final design was officially approved by the Orlando City Council on Monday, July 24, 2017.

To learn more about the process and the redesign contest, visit cityoforlando.net/flag-process.

Tim Eggert is a graphic designer for Kimley-Horn, an Orlando-based engineering firm, where he creates renderings, client presentations, and marketing collateral. A Central Florida almost-native, Tim earned a B.S in Graphic Design at UCF in 2002, and then moved to New York to hone his skills designing for luxury brands, non-profits, and everything in-between. Upon moving back to Central Florida, he picked up his paint brush and rekindled his love of fine-art landscape painting and the lakes of this beautiful area. (You’ll find one of his sunset paintings on an art box by the Downtown YMCA in Mills 50). He’s also recognized for his other passions of illustration, hand-lettering, and logo design. He lives in Winter Park with his wife, two-year-old son, and two rescue dogs.