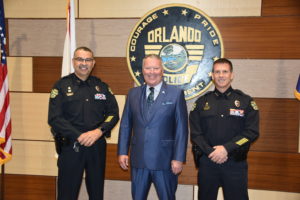 Today Mayor Dyer announced the appointment of Orlando Rolon as the next Orlando Police Department Chief. A 25-year OPD veteran, he will succeed Chief John Mina, who is retiring after nearly 28 years of service to the citizens of Orlando.

“I’m confident that under Chief Rolon’s dedicated leadership, OPD will continue to work diligently in protecting our community against crime,” said Mayor Dyer.

Chief Mina provided steadfast leadership during some of the most difficult challenges in the department’s history, from the Pulse tragedy to the death of Lt. Debra Clayton. He also worked tirelessly to combat crime and strengthen relationships with the community.

A 40-year resident of Central Florida, Chief Rolon, who is originally from Puerto Rico and served our country as a Marine, embodies Orlando’s diverse community.

Chief Rolon understands that public safety is the top priority for the City of Orlando and remains committed to keeping Orlando safe and keeping crime out of our community.